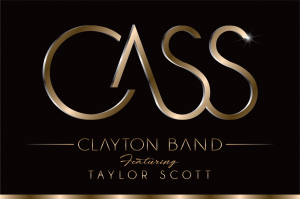 Cass Clayton is known for her smoky 3-octave vocal range and big, bluesy voice, as well as her slide guitar playing. She was recently voted as one of the top three vocalists and top three slide guitar players in Colorado (Colorado Blues Society, Members’ Choice Awards 2017). She’s been breaking out into crossover music with blues, funk, soul and rock as her vocabulary on an upcoming CD, to be released in May of 2018.

Cass Clayton Band featuring Taylor Scott, is the culmination of a songwriting and composing collaboration that led Cass and Taylor into the studio to record their own originals in 2017 and into the present. Their complementary music tastes began to evolve into music they both loved that didn’t fit in any particular box. Their combined influences of blues, funk, jazz, gospel and rock came together in an undefinable way.

“I think the audiences now are sophisticated because they have endless access to streaming music. They want great music that is inspiring and I’m not sure they care about genre as much. It’s my hope that people are ok if we can’t call it one thing, like rock-n-roll or blues,” says Cass.

Based on the belief that good music doesn’t always fit snugly into a single genre, Cass is taking her blues foundation and stretching to make music that is contemporary and inspires her and hopefully those around her. The result is a new CD release in June, 2018, along with a gig line-up featuring Taylor Scott.

“I wanted everything I wrote lyrically for this project to be from deep within me. My early songs were really drawing on ideas about life in general that I thought would be ‘cool’. I didn’t feel safe putting my real self out there. This is more personal, and I feel a bit exposed, but I feel more free too. I don’t want to hide behind lyrics about other people’s lives.

‘When It Comes To My Heart’ was a song I originally wrote as a ballad, but as a producer Taylor immediately heard it as a more upbeat percussive song. There’s an African beat that takes the song to a new place that’s really exciting. I liked the song before, but now it’s really powerful – you feel that heartbeat that drives the message within.”

With regard to how the collaboration came about, Cass says, “Occasionally someone comes into your orbit who adds that creative spark and takes you to the next level creatively. For me, it was Taylor. I hope there will be many more geniuses I run into, but just one is good too. (laughs) I hope I can add to someone else’s artistry as well and make their vision come true.”

For the instrumentation on the upcoming CD, Taylor brought in musicians he had worked with over the years who are seasoned session and touring artists. Larry Thompson (Otis Taylor Band) on drums; Todd Smallie on bass (with JJ Grey and Mofro, and formerly with Derek Trucks Band); Jon Wirtz and Tom Amend on Keys, Matt Wilkolak and and Jeff Miguel on horns and many more.  Each musician added their own flavor with Taylor composing all of the parts.

“I don’t see this as a departure from what I’ve done so far as a blues singer and slide player, but I do want to evolve and grow as a musician. It wouldn’t be exciting for anyone without walking the high wire a bit!

Whatever is coming up in my consciousness or his that week is what lands on the page. We’re drawing inspiration from past musical influences, but I think it’s really important that the music go someplace new and be uniquely yours. With the song ‘Least A Brother Can Do’, for example, I had a close friend from a long time ago, and she helped me in a terribly down time. I wanted to thank her and say, ‘hey, I’m here for you now too.’ The groove of that song and the way it builds just thrills me. I hope she loves it when she hears it too.

Working with a producer with the vocabulary that Taylor has is freeing. I can lean back and know he’s going to push the artistic boundaries that might be holding me back. We both hear different things but are committed to letting the music lead us to someplace new.”

Taylor Scott is an international touring guitarist/singer/songwriter based in Denver, Colorado. Taylor has toured all over the U.S., Canada and Europe with both the Taylor Scott Band and blues legend, Otis Taylor. His band’s new EP, Summer Moon, was released in 2017, and he has another CD to be released soon. His hallmark virtuosic guitar playing allows him to take influences from funk, soul, rock-n-roll and other genres and transcend the limitations of genre. He is also the producer and music director of the Cass Clayton Band’s upcoming CD and has multiple musical projects in the works.

Having grown up listening to 60’s and 70’s Soul, R&B, and Funk, Phillips is naturally focused on the groove. Stevie Wonder, Ray Charles, Sly and the Family Stone all played a big role in Loren’s musical upbringing but it wasn’t until Steely Dan hit the airwaves, from the early recordings to Aja, that playing bass became a commitment. Currently working with local blues and pop acts, Loren’s supportive bass and rich vocals keep him in demand around Colorado.

Loren is also the music director of Cass Clayton Band, no small role, given the complicated arrangements of some of the band’s original music and a rotating schedule of guest musicians.

Max is a music producer, drummer and film producer based in Boulder, Colorado. His music has been placed in feature films, and he has several full-length albums of original music under his belt. He has a passion for music and drumming, having studied privately with world-renowed drummer, Enrique Pla in Havana, Cuba. Max double majored in Film Scoring and Contemporary Writing & Production at Berkeley College of Music.

The “Long Island King of the Keys,” John Stilwagen moved to Colorado in the spring of 1993. He has toured with various bands across the U.S. and Canada, playing everything from rock to country, funk, ragtime and blues.

Cass is known for her big, bluesy voice and broad vocal range that comfortably goes from Blues/Rock to R&B, Soul and edgy Country sounds alike. Early influences of old-school blues, gospel, R&B and jazz can be heard in her powerful vocal style, song choices and lyrics. Regardless of the genre in which she is singing, she feels most connected to the blues vocalist tradition. Influences include Bonnie Raitt, Susan Tedeschi, Albert King, Koko Taylor, Etta James, Keb Mo, Nina Simone, BB King, Mahalia Jackson, and Aretha Franklin.