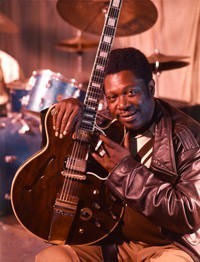 When I was 15 years old, my dad took me to see BB King at the Orpheum in Omaha, Nebraska. I had already seen quite a few blues shows, but this one was really a transcendent experience for me. I remember being literally love-struck and mesmerized with this man connecting all of us to whatever he had to say through music. The way he sang with that rich, expressive voice, then paused to “sing” with his guitar was different. It sounded to me like a continuation of his singing, the way he bended the strings and used vibrato to tell the story where his voice left off.

I was also curious why BB named his guitar Lucille? My dad had a lot of guitars, but he had never named one as far as I knew. It seemed like a good idea to name a guitar that could sing like it had a personality. To this day, I love to hear the story behind the name of a musician’s guitar. There’s almost always an intimate story. When I found my Gibson SG, I named it after my beautiful step-mom, Bonnie, who died in January of 2015. We shared a passion for Delta Blues, and she was thrilled that I was playing slide guitar. She wasn’t well enough to travel and never made it out to hear the band, but every time I pick up that guitar I automatically think of her.

For those of you who haven’t heard the story of BB King’s Lucille, this interview with BB is really great. Seems there was a fire at a nightclub at which BB was playing. When he ran out of the club, he heard two guys arguning about a woman who worked in the club named Lucille. Well BB ran back into the club to save his guitar and after the event decided he should call it “Lucille” in honor of that night and that woman. Hope you enjoy this video!  How BB King Named His Guitar